These Beef & Eggplant Middle Eastern Nachos have become somewhat of an obsession lately. I made them practically every other day during Ramzan for Iftar mostly because they were so filling, and light at the same time. Did I mention yum? If you are somewhat obsessed with Middle Eatern cuisines, this ones for you!

This recipe has a layer of crispy pita chips, loaded with a layer of spicy beef and vegetable mix, topped with a tahini sauce, garnished with fried almond slivers and parsley. It is somewhat similar to A beef and aubergine Fatteh, but as my friend from Iraq pointed out, Fatteh means “submerged” where the pita chips are almost submerged in sauce. So this, most definitely, are nachos!

Why I love these Nachos:

If you are someone who is new to Middle Eastern or Mediterranean style of cooking, some of the ingredients might not be a staple in your pantry. So I’m gonna quickly introduce you to the special Spices / Condiments needed to make this recipe. You will need:

I’d highly recommend to use the spices as is, to create the authentic Lebanese/Arabian flavors. But if you don’t want to purchase extra spices, you can always find substitutes for these ingredients at the end of the post.

I personally find Pita chips to be the best for this recipe. Made from “Khubs” or pita bread. Since pita breads are like pockets, when you cut them up in triangles, open it up to get 2 pieces of chips.

You can use pre-made pita chips as well, if your local stores hold it. Or you can make some at home in 10 mins!

Simply drizzle some olive oil on a baking tray and sprinkle some salt. Lay down all your chips and bake them for 10 mins or so at 200C. When they turn a nice crispy golden color, take them out and set aside to cool down.

Preparing the Eggplant and Beef topping

So, to cook the meat topping, I use olive oil. It just intensifies the flavors so much more. Add your mince meat in olive oil in a pan and saute at high heat till all the water from the meat evaporates.

Tip: Cooking the meat down first at high heat, without any spices, helps in evaporating all the water from the meat and also gets rid of any smell or bacteria that might be in it.

Now most Arabian dishes may or may not use garlic in their beef and chicken. But I like to add a little garlic ginger paste to the meat to add acidity and also get rid of any residual smells.

Once all your water evaporates, add all the spices to the meat and saute it for 2 mins. I’ve been a little heavy handed with the spices here, because eventually these spices are going to season the eggplant, as well as some extra veggies. So if you taste your meat right now, don’t be alarmed if it tastes overpowering.

Add water and cover the mince and the eggplant. I let it cook for about 15 mins at medium flame which is enough time for the eggplant to soften up and the meat to cook. (Also, husband doesn’t eat eggplant, so this is a great way for me to mask the eggplant by overcooking it…yeah I have a manchild my friends!)

In 15 mins, you’ll see a beautiful mince and eggplant base. That’s when you add in all the veggies. I’ve used chopped onions, tomatoes and bell peppers. You can add or substract veggies if you like, but I’d definitely recommend to not skip tomatoes.

Let the tomatoes soften up a bit, it’ll take about 3 to 4 mins. You will get a nice topping which is just a little towards the saucy side. Add in the pomegranate molasses now. And viola! Your topping is ready! You can also add a generous amount of parsley to the meat topping as well if you are a parsley fanatic.

Making the sauce is just like putting together any sauce. Dump all ingredients in a bowl, whisk it and you are done.

To prepare the almond slivers, all you have to do is soak them in boiling water for 10 mins. Remove the skin and cut them in thin slices. Fry them in olive oil and thats it! They add this awesome crunchy element to the nachos. Also, for some reason, fried almonds taste like Peanuts. WHAT!! Temme if you feel it too!

This recipe easily serves 5 but tbh, me and my husband eat it for dinner so in which case, it only served 2 so!

IMPORTANT: Always assemble any type of nachos when you are read to eat so that your chips don’t get soggy.

Anywhoooo! For assembling, I put a little bit of the tahini sauce on top of the chips —–> Then its a layer of all the meat mix ——-> and then its alll the tahini sauce ——-> topped with almond slivers and parsley. 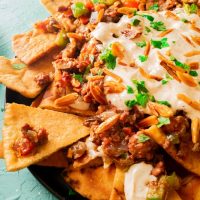 You can use spring rolls sheets instead of pita chips or regular nacho chips as well. If you have to serve the nachos later, prepare the components and don’t assemble until needed.