This recipe for Chicken Tikka nachos was more of an experiment gone right rather than something that I started with full intention. These nachos are a spicy fusion snack made with all the Pakistani/Indian spices, a yogurt sauce, a mint sauce, some chopped up veggies, served with Mexican tortilla chips.

It’s one of those fusion recipes, that just sticks with you once you make it. Just like Pakistani style batata harra, you guys are going to love this!

I am talking a blast of flavor happening right in your mouth. Without further ado, here’s the recipe

When we talk about toppings, you know we are basically talking about dumping stuff on top of tortilla chips right?. Here’s a picture showing all the things you are going to be throwing in the mix. And since this is soooooo straight forward, I’ll just quickly use pictures to walk you through the process.

There’s some cilantro in the picture, which I just use for garnish. The tortilla chips I used were low sodium low cal baked ones. And honestly they were almost insignificant because all that flavor coming from the toppings. So, you can totally opt for the tasteless “healthier tortilla chips” for this recipe. (Ya i find them tasteless ok? sue me :P)

For the tikka mix, I used boneless chicken and cut it up into small chunks. Then I prepared my tikka marinade and reserved 1 tsp of mixture to add into the gravy later. I marinated the chicken for about 15 mins. Cooked the chicken on a pan along with some tomato paste, the reserved marinade mix and some cream. Viola! the chicken tikka mix was ready. The whole thing took me hardly 20 mins. And thiss was, The longest part of the whole recipe.

While the chicken waited, I prepared the veggie mix. Its a simple onion, tomato and bell peper finely chopped and seasoned with lemon, salt and pepper. (think Tikka pizza toppings). Done? ok set aside.

For the mint sauce, I used mint leaves, some green chilies, lemon, garlic, salt, some avocado and water. Chucked everything in a blender and made a smooth rich creamy sauce.

This sauce is a creamier version of the Mint Chutney that is usually served with Chicken tikka. The only new addition is the avocado.

Disclaimer: This sauce is very spicy ( I mean, for brown folks too ok?) so go light on this sauce if you can’t handle spicy food very well.

Why the avocado?
– It gives the sauce some body and creamy consistency, so prevents it from become watery.
– It adds a healthy kick my friends!

Moving on to yogurt sauce. Very basic. Very mild. Also very yum. This sauce just had yogurt, cream and a little seasoning. This sauce is the mild cool topping so it would work with everyone’s palate (by everyone I mean spicy and non spicy peeepss)

And that’s that! Then I started dumping all of this on top of a plate of plain tortilla chips…and MY friend….the rest……is history 😀 I did, veggies, chicken, sauces, and veggies again and cilantro. That’s the sequence I went with

Avocado – If you don’t have avocado on hand, just use 1 tbsp of cream instead and add that to the mint sauce.

Less spicy – There is no denying these nachos are packed with heat! if you can’t handle spicy food, make the following changes to reduce the spice level of this dish:
– Use paprika instead of red chili powder and 1 tsp instead of 2
– Use 1 green chili instead of 3
– Use less green sauce on the overall dish.

Box masala – If you don’t feel like making your own spice mix, then go ahead and use any Chicken tikka masala mix from Shan, National etc. 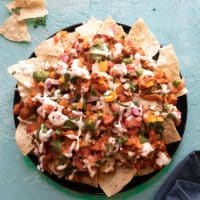 Go easy on the red and green chilies if you can’t handle spicy food. You can also use packet masala for chicken tikka and exclude all the dry spices from the chicken marination. Use about 6 tbsp of packet masala.

This was the bomb! Loved it so much! Will be a regular snacking favorite in our home!

aa Nadia! so gr8 to hear this from you! loveeee