I’d love to take credit for coming up with the idea of Apple Cinnamon Latte. But the truth is I had it at an Arabian kiosk last year. They were hot mild shots of sweet cinnamony milk with a hint of apple. We came home dreaming about the drink all the way and of course I grabbed an extra cup to have some at home. 12 failed experiments later, I finally recreated the drink! And it seems only logical to share it with the rest of you.

Now, I am not sure if this drink is Middle Eastern in origin or just a drink they cooked up, so I am not going to comment on the roots of the latte. (Unlike Saudi Champagne, where the name itself tells you the origin). But I can tell you this, its yum, its mild, its a great post-food drink for the guests in winters, and it most definitely is toddler approved (that’s coming from friends)

This Latte was served to us in the form of shots so based on that, this recipe would give you roughly 4 shot glasses or 2 medium cups.

The steps are pretty basic, but a little visual aid never hurts anyone. I cooked the apples first with honey, cinnamon, coffee and water. This is done to cook the Malic acid present in apples. Adding raw apples to the milk will cause the milk to seperate.

So I cook the apples for about 10 mins or until they soften.

Then I hand blend them until I get a nice smooth apple sauce.

NOTE: I don’t throw the pulp away, in fact I use this as a face mask. It has all the right ingredients to make an awesome face mask! Read more about that here

In the sauce pan, I added milk at medium flame and whisked it a little bit to get a subtle foam going on.

Then I went ahead, and added my apple syrup and whisked it for another 2 to 3 mins at medium flame.

Once I was happy with the foam, I poured the latte in shot glasses, topped it off with some whip cream and more cinnamon.

You can make same recipe using apple or caramel syrup. In which case you can directly add all the ingredients in the sauce pan and whisk away directly. ( no need to break the recipe in 2 steps as there would be no raw apples)

All the flavors in this recipe are very subtle, if you want to overpower one, experiment and go ahead and increase the quantity of coffee maybe? or cinnamon. 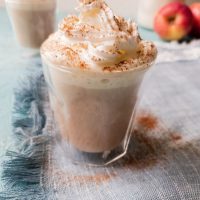 If you don’t plan to consume it straight away, don’t mix the milk with the apple sauce. Whenever you are ready to drink, start with step. no. 5 If you chose to use apple syrup, you can add all the ingredients directly in the sauce pan and bring them all to heat together.

Hey there! I am Wajiha, the blogger and cook behind Butter over Bae.
My friends had an intervention for me, to stop me from spamming them with all my kitchen experiments and food pictures. But, instead, I made this! And now I put up my food spam for the world!

My blog is literally all my food obsessions in one: Pakistani/Indian food, Pan-Asian recipes, and desserts! I’d loveeeee to show you around and tell you more. Grab a cup guys and click below